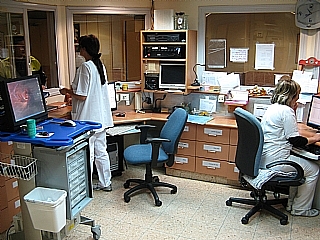 Ward description:
The patient population includes both men and women aged 18-62, for whom this is their first hospitalization in Israel, and who suffer from mental illnesses/disorders that require treatment in a hospital setting.

In addition the ward also hosts patients who are regular/reserve soldiers.

The main diagnoses of people treated at the ward are: Schizophrenia, bipolar illness (manic depression), depression, and obsessive-compulsive disorder and personality disorders. In addition the ward also hosts people under a court order for mental evaluation.

The ward's structure provides a safe environment for inpatients (restricted wing) and upon improvement in their condition they are transferred to the open wing, where it is possible freely exit the ward to the hospital area.

The existing groups are in various fields:

Guidance groups guided by the nursing staff in the following areas:

The ward includes a gym for the patients, located and operated by the occupational therapy staff.

Training:
The ward is recognized for General Psychiatry internship by the Scientific Council of the Medical Association.

Students: As a university department, students from the various treatment subjects (medicine, social work, nursing, clinical psychology and occupational therapy) arrive to experience gain practical learning through the mentoring and close supervision of the ward's staff, including students from academic institutions abroad.

Research: A research unit is integrated within the ward and led by Prof. __________ who is an associate professor at the Technion medical school.

For many years the research at the ward focuses on basic mental illnesses all their various aspects: Schizophrenia, obsessive-compulsive disorder, bipolar disorder (manic depression) and more.

At the same time with focusing on the study of basic neurobiological and genetic aspects, the research also focuses on clinical issues such as: Patients' response to treatment, predictive factors for response, and side effects of treatments - in order to promptly identify them and respond to them. The cumulative experience, resulted in the publication of two booklets intended for the patients, their families and the general public: One about schizophrenia, and the second about bipolar illness.

Innovative treatment methods were developed at the ward, which were adopted by the global psychiatric community, and which relate to two key issues: