Ward 5A - psychiatric for hospitalization at an active state 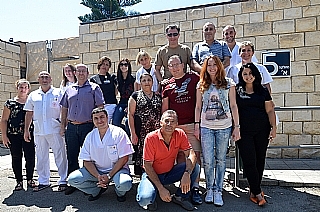 Ward description: The ward is characterized by providing quality and professional treatment to the adult population (18-62) who suffer from mental disorders that require treatment in a hospital setting, including outpatient setting, which enables a gradual return to the community, with the patient staying at the ward from morning time and until noon and then goes back home. The ward's staff considers the hospitalization period as a crossroad for balancing and multi-disciplinary change aimed to return the patient at a better and optimally balanced mental state to a reality adapted to his needs and abilities. The guiding goal is maximum improvement of the patient's quality of life, and his release when his state and the reality to which he returns, minimize repeated hospitalizations as much as possible. To achieve that combined teamwork is utilized with the families and community entities, with the patient at the focus of all efforts.

The ward's staff consists of: Physicians, nursing personnel, a social worker, a psychologist, an occupational therapist and a medical secretary.

The patients are admitted to the ward through the hospital's emergency room as per a ward round.

Unique activity of the ward: Since 2007, the ward serves as a pioneering ward on behalf of the Ministry of Health in a project for the computerization of psychiatric patient portfolios.

Training: The ward is recognized by the Scientific Council of the Israel Medical Association for full-time internship in psychiatry.
The ward coordinates study activities of the center's interns in: Nursing, psychology and social work.
This activity includes the design of a study program and close monitoring of its implementation, for interns at the ward in particular and at the center in general.

The ward is a branch of the Faculty of Medicine at the Haifa Technion, and serves as the main facility for the psychiatry studies of medical students.

Ward structure: Restricted wing: Hosting patients in need of a restricted settings. Exit and entry of inpatients from the wing is possible depending on the patient's mental state. Only immediate relatives or other significant visitors may be allowed to enter the wing, as per the decision of the treating physician.

It is forbidden to enter the visitation room with cell phones.
It is forbidden to bring potentially dangerous items into the wing such as: Glassware, sharp objects, belts, cigarette lighters and matches.
Smoking in the restricted wing is permissible only at the yard and only at set times.
It is strictly forbidden to order in food for the patients in the closed wing.

The open wing: Accommodates patients whose condition was bettered. During the stay at the open wing emphasis is given to the rehabilitation process and the patients' reintegration in the community. Once discharged, patients continue to be medically monitored by physician from the ward, on Wednesdays and by appointment.

Nursing staff - provides daily medication, medication guidance, monitors the patients' functioning and structuring order among the patients. In an attempt to encourage them to develop independence skills and to strengthen their capabilities and performance. The staff encourages the formation of social relationships between patients through active participation in in the ward's groups. In addition, the staff provides personal attention and guidance to families.

The psychological service - individual treatment talks are held, targeted on the crisis, or long therapeutic discussions. In addition, meetings are held to address the families. Once a week a group meeting is held under the direction of the psychologist, at the open wing, about preparing for discharge.

The social service - the ward's patients undergo a psychosocial diagnosis of their marital, economic and social status, in order to identify problematic aspects and assess the potential for rehabilitation. Depending on their state, an intervention program is implemented by the ward's social worker, in cooperation with the ward's staff and relevant factors in the community.

Occupation therapy: patients take part in occupational therapy in order to provide them with the tools and skills that will enable them to cope with life's demands. A patient staying in the restricted wing engages in short-term works and expressive tasks using various materials. A patient staying at the open wing meets with an occupational therapist for evaluation and diagnosis of capability and functioning, and is set with a treatment plan according to his ability and choice.

Activity groups at the ward -

Ward 5A has for years been carrying out research activities, which mainly focuses on areas subjects such as: Epidemiological psychiatry, genetic study of affective disorders and schizophrenia, psycho-pharmacology, new diagnostic tools of ADHD:

A feedback box is situated at the entrance to the ward, through which you can express your opinion.